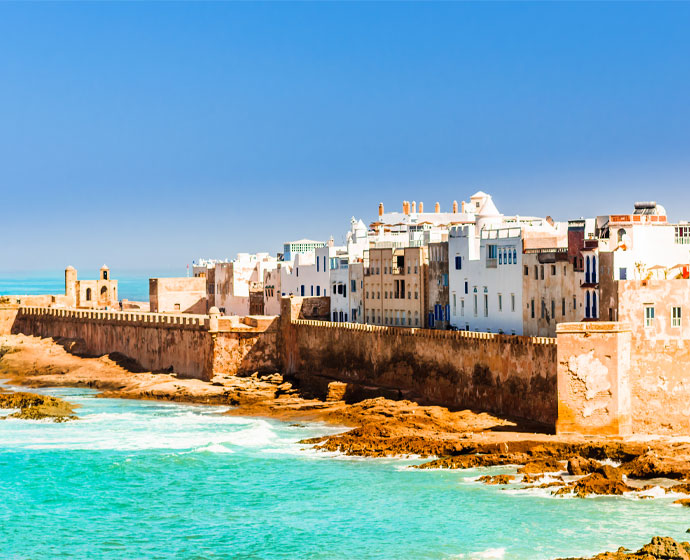 The city of trade winds (alizés), forever bringing a fresh breeze to culture, firmly believes in art and its virtues. It is the symbol of culture as a vector development, and has proven such throughout the years. When a city writes history across its own walls…

This city explodes with potential. Given its architectural and cultural heritage, its history and all of the legends inspired by the city, Essaouira has become a mystical and magical destination. In Berber, the name means “The Well-Designed”, and Essaouira (as it was named by the earliest inhabitants of the region) has been frequented by Phoenicians, Carthaginians, Romans, then the Portuguese. The foundation of the city of Essaouira proper was the idea of Sultan Mohammed ben Abdellah, who ordered its construction from 1760, with the participation of renowned architects such as Théodore Cornut. This safe haven experienced a golden age when it became to most significant commercial port of the country, as well as a veritable diplomatic capital. Essaouira was also known for its healing qualities and thalassotherapy thanks in great part to the Hôpital Indigène (Indigenous Hospital) and its director, Doctor Bouveret. In the 1960s, the city received visits from legends like Jimmy Hendrix and Cat Stevens, who claimed to be inspired by the city to write and compose music that have gone down in musical history. From this illustrious past Essaouira has perhaps not fully exploited its advantages, cherrypicking the best of it and always moving forward. From this past, the city is building its future. Today it continues to be a destination for music lovers and curious observers, those who wish to lose themselves in the moment, and many celebrities and artists.

Art in service to tourism


Everyone agrees that Essaouira is home to culture, and has seen the birth of extraordinary talent. Actors, singers, musicians, painters, or theatrical artists, the city has been home to talents who have travelled the world, bringing acclaim to their native city. Tayeb Saddiki, Edmond Amran El Maleh, Abderrahman Paco, Mahmoud Guinea, Boujemaa Lakhdar, Hussein Miloudi, and so many more. The city, which has lost many of its children who have built their lives elsewhere, had lost a bit of its former 1980s glory until it was once again saved by culture. By 1991, the city had fewer than 10 hotels, and had almost been forgotten. In 1998, the Gnaoua and World Music Festival was created. In 2001, the Essaouira medina was listed by UNESCO as a World Heritage Site.

Twenty years later, Essaouira has been the birthplace of several festivals, including Le Printemps Musical des Alizés, (Musical Springtime Winds), the Andalusia Atlantic, and the city now boasts over 300 hotels and has become one of the most desirable destinations in the world.

CNN has named Essaouira as one of the most beautiful beaches in the world, and the Daily Telegraph classified the city as one the 20 most popular and world favourite destinations in 2015. Around the world, when conversation turns to Morocco, Essaouira is one of the cities that come to mind. The city has become a reference of peace, exchange, cohabitation, and culture on an international scale

• From Rabat or Casablanca :