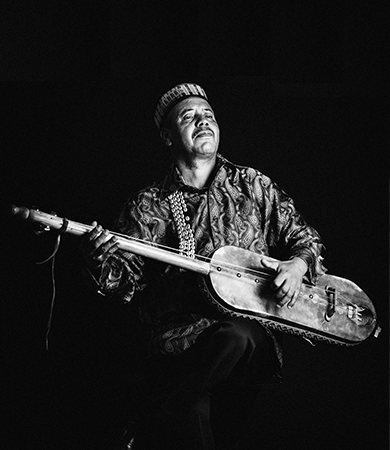 Majid Bekkas, the talented multi-instrumentalist, is both attached to tradition and open to encountering other musical cultures. Known for his many collaborations with jazz greats such as Archie Shepp and Joachim Kuhn, this creator mixes blues, jazz, soul, and Tagnaouite genres. He learned to play the oud at the national conservatory of music and dance in Rabat, and in parallel the culture of the Gnaoua brotherhoods alongside Maâlem Ba Houmane, where he mastered the guembri. Majid has the capacity of play other instruments with brio: oud, kalimba, guitar. He also learned the blues and soul, playing guitar since 1979. He transports music lovers to the crossroads of fusion between traditional Gnaoua music and Afro-American blues. An excellent example is his collaboration with Malian musician Aly Keita, who debuted in 1998 and with whom Bekkas recorded the album Makenba in Belgium in 2010. This album was chosen by the world music magazine Songlines as the best Gnaoua fusion album. In March 2016, Majid Bekkas received the Académie Charles Cros (Marseille) prize for his opus Al Qantara, and in 2016 the Visa for Music Trophy in Rabat. For this 22nd edition of the Festival, he presents “Afro Gnaoua Jazz Ensemble”: this project is the result of a long musical and personal collaboration with the ambassador of the African balafon, Aly Keita of Mali. Joining them is the great Mozambican bassist - who often plays with Cuban pianist Omar Sosa -, Childo Thomas, Belgian saxophonist and flautist Manuel Hermia, and talented Moroccan percussionist, Amine el Bliha. This line-up will swing to the qarqabous of the Chaouki family (Gnaouas of Rabat).