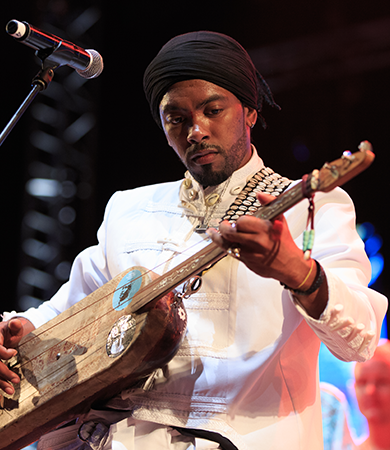 Born in 1987 in Casablanca, Maâlem Khalid Sansi grew up in a Gnaoui family. He is the son of Hassan Sansi "Moussandaw'', a leading Gnaoua moqaddem. Like most Gnaoui maâlems, Khalid began as a Koyo with many different maâlems, such as Said & Abderrahim Oughassal "Benthami", who are also members of his family. The young man later joined groups with the maâlems Abdenbi el Gadari, Mustapha Baqbou, and finally Hassan Boussou before creating his own troupe. He has always been keenly interested in contemporary dance, and so in 2006 he joined the 2Kfar company, with whom he developed several dance projects using his own Gnaoua spin. Khalid Sansi has also collaborated with many renowned artists such as Karim Ziad, the late Abdellatif Zine, Khalid Benghrib, Jacques Schwarz-Bart, Joss Stone, Oum, Lhiba Kingzoo, and Mone Ekang.

In 2010, the maâlem Hassan Boussou handed him the Guembri on stage, in recognition of his mastery of the Gnaoua tradition. In 2014, Khalid created "Timbuktu" – in partnership with the famous Malian singer Malik Diop -, a project that brought together diverse Moroccan and African talents and which he took on tour and produced at the Gnaoua and World Music Festival. He also participated in other national and international Festivals like the Elche Live Music Festival in Spain, the Festival of Casablanca, the Festival Noujoum Gnaoua, the Diwane Music Festival in Algeria, and L'Boulevard of Young Musicians.