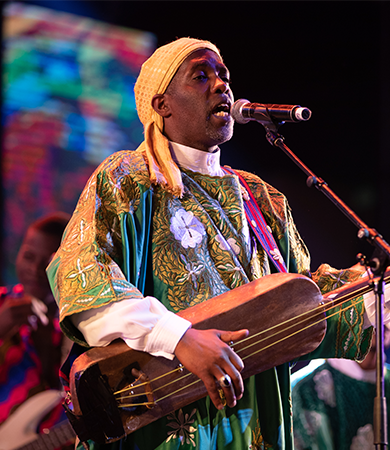 Since tagnaouite is a family affair, Hassan Boussou drank from the music well starting at a very early age. Son of the late Maâlem H’mida Boussou, Hassan Boussou was taught according to the precepts of the Gnaoua tradition. In 1996, he formed Gnaoua Fusion with a group of Belgian musicians. He recently relocated to France, where he met the future members of Séwaryé, with whom he decided to renew the experience of cross-cultural fusion. The traditional repertory remains the principal source of inspiration for Maâlem Hassan Boussou, with the added touch of Western sound. He often performs musicians who played with his late father, Maâlem H’mida Boussou. Faithful as ever to the Festival, Hassan offers all the generosity of his art at every edition. In 2016, he fusioned with American masters of free jazz Jamaaladeen Tacuma for the 19th edition of the Festival. In March 2017, an adoring audience gave him a standing ovation at the Gnaoua Festival Tour at the Bataclan in Paris, a 100% fusion concert with Maâlem Mustapha Bakbou, Hindi Zahra, Mehdi Nassouli, Tony Allen, Karim Ziad and Titi Robin. For the 20th anniversary of the Festival, Maâlem Hassan Boussou presented a residence especially created for the occasion, with Hmadcha and Griots from Mali.