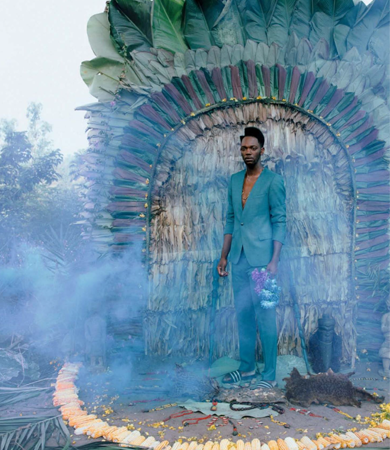 Baloji, whose name means “sorcerer” in Swahili, was born in the Democratic Republic of Congo in 1978. At the age of 4, he arrived with his father in Belgium, a country he describes as “a land of surrealism, with multiple identities”. As an adolescent, he discovered hip-hop and the art of sampling by way of electronic music, as well as a passion for tag, rap, and dance. The sum of these influences make way for a mix that combines African, Congolese, Nigerian, Zimbabwean and Ghanaian rhythms. As an artist in perpetual movement – musician, poet, director, a man of both images and ideas -, he is considered to be among the first to successfully blend rap and African music. Baloji’s music is a sound that travels from Europe to Africa and back, crossing styles between traditional African and Afro-American music (hip-hop, soul, funk, jazz). He was worked with Theophilus London and Blitz the Ambassador, received congratulations from Nick Cave, Questlove, and Gilles Peterson, and the praise of Anglo-Saxon critics. In 2008, he released his first solo album, Hotel Impala, which went gold and received two Octaves d'or. He followed up with a second solo album, Kinshasa succursale, in 2010. In 2018, he brought out 137 Avenue Kaniama. A mix that explored slam with sharp texts and catchy rhythms. Baloji continues to practice sorcery across continents.