Essaouira the magic theater of the Festival

Ever since its inception, the Festival has been keen on making this event part and parcel of Essaouira, highlighting the authenticity and unique charm of the city. In total, more than 20 places in the medina have hosted concerts: The Grain Market, Sqala, Zaouia, riads or open-air stages... But the festival is essentially about this magic atmosphere whereby in the streets of the city festival-goers casually come across musicians, journalists, genuine Souiris or attending prominent figures, and where at every street corner music resounds and the breath of the Festival rustles.

Essaouira, the pearl of cultural tourism

Ever since the creation of the Festival, Essaouira has enjoyed an economic boom that has had a positive impact on many sectors, particularly the hotel and restaurant industry. During the festival, the population of the city which stands at 70,000 inhabitants is multiplied 6 folds, boosting the infrastructure required to host tourists and visitors. Indeed, Essaouira has become one of the most popular tourist destinations in Morocco since the start of the Festival. Thus, the number of guest houses and hotels jumped from 9 to 160 between 1998 and 2008 and the number of restaurants from 7 to 64 during the same period. The basic infrastructure of the city as a whole is being developped in a sustained manner, not to mention the unemployment rate which has dropped sharply due to the implementation of various projects.

This showcases the dynamism generated by the Festival, which literally stoms the city and puts its inhabitants and visitors under its spell. While respecting the spirit of the city, the Festival is committed to making Essaouira a notorious city in different world fora, promoting its brand image as a highly open and tolerant magical city.

(Survey conducted in 2014 in partnership with the Valyans Foundation) 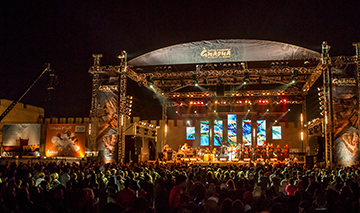 in revenue for the city in 16 years

by 2 to 7 times for some activities

300,000 spectators welcomed for each year edition

Guest Artists: Up to

67 bands and guest artists each one edition

9 stages in each one edition

Every invested by the festival

generates 17 dirhams to the city