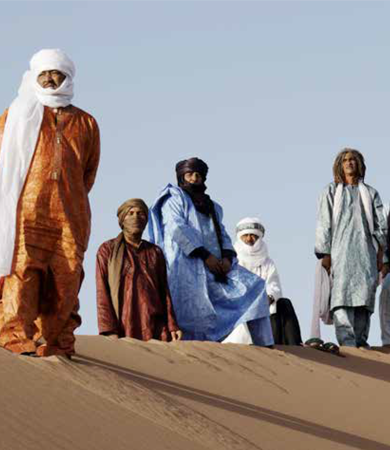 Tinariwen is more than just a classical group, it is a cultural movement with origins in the Adrar des Ifoghas, the Saharan mountain range lying between northern Mali and southern Algeria. It is the fruit born from an encounter, in the Tamanrasset Desert of Mali, among three Tuaregs: Ibrahim Ag Alhabib, Hassan Touhami, and Inteyeden Ag Ableline. The creation of Tinariwen in 1982 is intricately linked to the condition of exile for the Tuareg people. The group - which takes its name from the Taghreft Tinariwen (meaning "building the country") - began to perform during this period of exile. The group later evolved into complete formation, accompanied by a female choir to highlight the group’s musicality, echoing their traditional encampments. Their music, “Assouf”, signifies “solitude” and “nostalgia” in compositions that combine blues, rock, and traditional Tuareg music. The music is mesmerising and powerful, and break down borders. In 2014, the group produced Emmaar, the album that includes collaborations with guitarists such as Josh Klinghoffer (Red Hot Chili Peppers) and Matt Sweeney (Chavez, Zwan). In 2017, the collective created an 8th album, Elwan. This last work is a tribute to the Saharan mountains, home to the members of Tinariwen and, over the past five years has become a war zone. Elwan takes its rightful place, in the continuity of Tinariwen spirit, as a symbol of resistance.