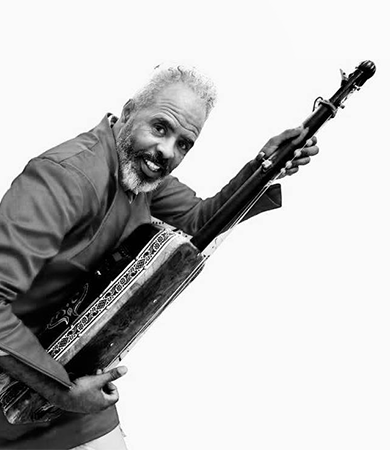 A leading figure of modern Tagnaouite, Marrakech-native Hassan Hakmoun flew to New York to add a new dimension to his art and his music, enrolling at Lincoln Center in Manhattan. Long influenced by musicians such as Adam Rudolph and Don Cherry, he takes inspiration from jazz, particularly in fusion with world music. This talented musician discovered Gnaoua music at the age of 4, during a trance ceremony. He became interested in percussion and traditional trance dances. He chose to play the sintir and created his own percussion sound by using the instrument as a drum. He collaborated with musicians such as David Sanborn, Peter Gabriel, and The Kronos Quartet. He released an album in 2002 entitled The Gift, in collaboration with producer Fabian Alsultany, in which he brilliantly aligns Gnaoua music with traditional Arab music. He also collaborated with the great Dee Dee Bridgewater on her song “Caravan”, from the album Prelude to a Kiss. In addition to being an outstanding musician, Hakmoun is an actor and dancer who has participated in multiple film projects including the Disney film An Indian in the City. He has also composed for film soundtracks. Hassan Hakmoun has imprinted the Festival with his talent, his incredibly energetic style, and his truly international dimension. Hassan Hakmoun is currently developing a project in collaboration with other dancers to create a new style of Gnaoua dance. This year he is presenting a special project with his group, The Universal Force.

The Universal Force is a project led by the New York-based maâlem Hassan Hakmoun. In collaboration with renowned musicians and dancers, he proposes a new reading of the Tagnaouite rhythms and dance. He has gathered old friends and new talents for a concert that will mix sounds for greater New York and the ancestral rhythms of the Tagnaouite. With Justin Purtill on guitar, Leonardo Genovese on keyboards, Matthew Kilmer on percussion, Dean Johnston on drums, Brahim Fribgane on the oud, and Chikako Iwahori on vocals, percussion and dance, Hassan Hakmoun will give the best of his musical experience as both Gnaoui and as musician.