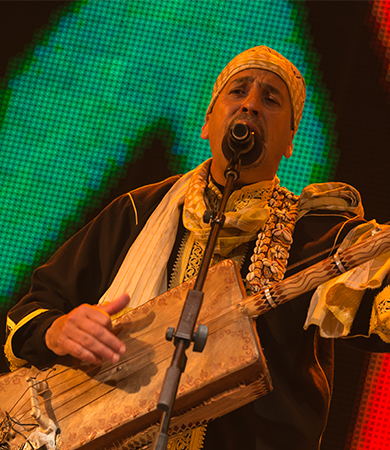 Tyour Gnaoua is a group led by the maâlem Abdeslam Alikane, artistic director and one of the founders of the Essaouira Gnaoua and World Music Festival. Very aware of the power of fusion and the need for Gnaoua maâlems to develop their stage presence, he worked heart and soul for Tyour Gnaoua. But he also worked tirelessly on the project in Essaouira, his home town. Within the context of the Tagnaouite, he established himself by a singular mastery of the therapeutic practice. Tyour Gnaoua and Abdeslam Alikane have become messengers of the Gnaoua arts throughout the world. They have taken the stage with countless world and jazz legends, such as Jaleel Shaw in 2008 or Ray Lema in 2007. Tyour Gnaoua offered audiences a 100% jazz fusion with guitarist Sylvain Luc in 2015, as well as a 100% blues and African folk fusion with the Songhoy Blues quartet in 2016. In 2017, to celebrate the 20th anniversary of the Festival, presented a never-before-seen concert with his old friend Ray Lema the result of a musical residence. He has recently appeared in Rio de Janeiro and at cultural events in Kuwait.