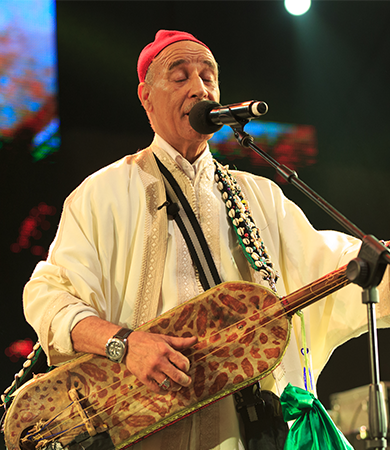 Abdelkebir Merchane was born in Marrakech in 1951. At barely 9 years of age, the Tagnaouite held few secrets for him. He is of Arab origin, and the only Gnaoua in his family. After suffering a series of miscarriages – eleven in total – his mother entrusted him to the care of a black nanny. He thus participated in lilas from a very early age. His masters, including El Ayachi, Baqbou and Mohamed Sam, initiated him into the purest tradition of the Tagnaouite. His styles of predilection: Marsaoui (Essaouira) and Marrakchi. He has participated in many international festivals in Europe, Arab countries, and Japan. He currently directs the Oulad Sidi H’mou group.