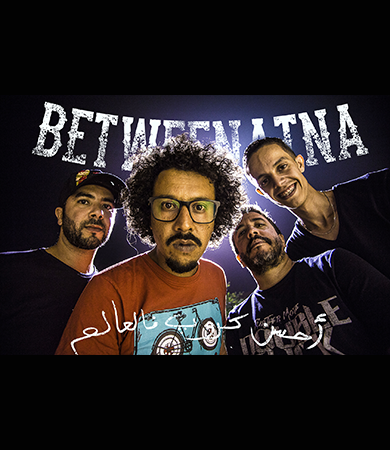 This group, a mix of Between and binatna (between us), is the fabulous result of long friendship and a spur of the moment decision. A group of friends, who wear their name well, have created some unlikely tunes that combine rock rhythms and a hint of metal with wildly original lyrics. Their collective sense of humour became their signature. Serious rock that manages to be funny, with texts that hit home. The Betweenatna adventure began in 2011, and thanks to the sublime mix of these veterans of the new Moroccan scene: on guitar, Abdessamad Bourhim (of Nekros, Reborn, Hoba Hoba Spirit), singer Oubize (of Darga, Hoba Hoba Spirit), and on bass, Said Gamha (of Immortal Spirit, Krash Karma). At the beginning, and for no particular reason, they recorded the song “Abada”, a reference to a scandal involving 14 young musicians. Their hallmark: funny, offbeat songs like “Bakiat Marlboro” and “Isabelle Maticha”.