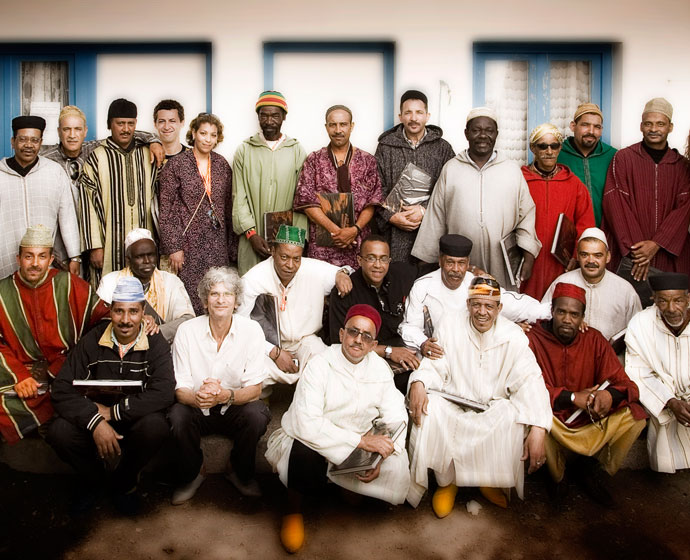 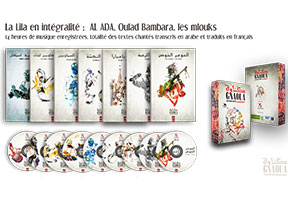 In order to preserve the Gnaoua heritage, the Yerma Gnaoua association undertook to produce an anthology dedicated to this ancestral art in order to highlight its rhythmic, melodic, lyrical and stylistic richness.

Relying on a collection of sung texts, this work seeks to create as well a dynamic of creativity by enabling musicians-composers and researchers to access an important basis going back to the original sources for all Moroccan music. We are also aware of the interest that many musicians around the world have for this music. They will find in this anthology another opportunity for them to serve Gnaoua music in the large space of world music.

In the presence of a great oral tradition, the essence of which is consistent variation whithout change to its foundations, the antology could not pretend to seek exhaustiveness, especially that the variance of interpretation impacts both the viewpoint of the maâlem and the setting in which he evolves. The performance changes in space and time and also according to the context and the audience.

The oral tradition being notably mobile and changing, maâlems belonging to different generations have got into the habit of omitting some parts and adding others. Faced with the difficulty to record an immutable repertoire, the anthology establishes a normal course of the various phases, heedless of differences that do not affect the coherence of the corpus as a whole.

We have compiled in the 9 Cds of the anthology all the conventional phases, and in a cross-play of regional interpretations we have covered all the nuances and all the references of the Gnawi repertoire: the introductions, the percussion playing, the playful phases, as well as the complete course of the mlouks and colours.

Our anthology is founded on three criteria: authenticity, integrity of the lila (the ritual night) while bearing in mind certain significant variances.

First of all, we needed to remove the many pieces resulting from recent contact with popular urban songs as well as from exchanges with some religious brotherhoods.

We also kept the conventional 3-part lila (al âda, oulad Bambara, and the mlouks). And last we integrated some regional variants and mainly the performance of isamgane (Amazigh gnaoua), the version of the north, the sebtiyyin (Jewish gnaoua) and the presaharian gangas.

The choice of the maâlems does not entail any ranking order. It goes without saying that all masters are equal in value, our only criterion was to assign to each of them the repertoire he masters the best; the aim being to cover the whole range of the repertoire.

To this date, we have more than 14 hours audio recording on 9 CDs. All the texts sung were transcribed into Arabic and translated into French. The Anthology includes as well a book with texts shedding some light from three perspectives (historical, anthropological and musicological), a travel notebook retracing the first prospection mission and, of course, the maâlems’ biographies.

A lot of iconography and modelling work was done with multiple arrangements for the anthology to come out as a landmark event paying tribute to our living human treasures and to the extraordinary intangible heritage they represent.

The Anthology was released at the 17th edition of the Festival, in June 2014.